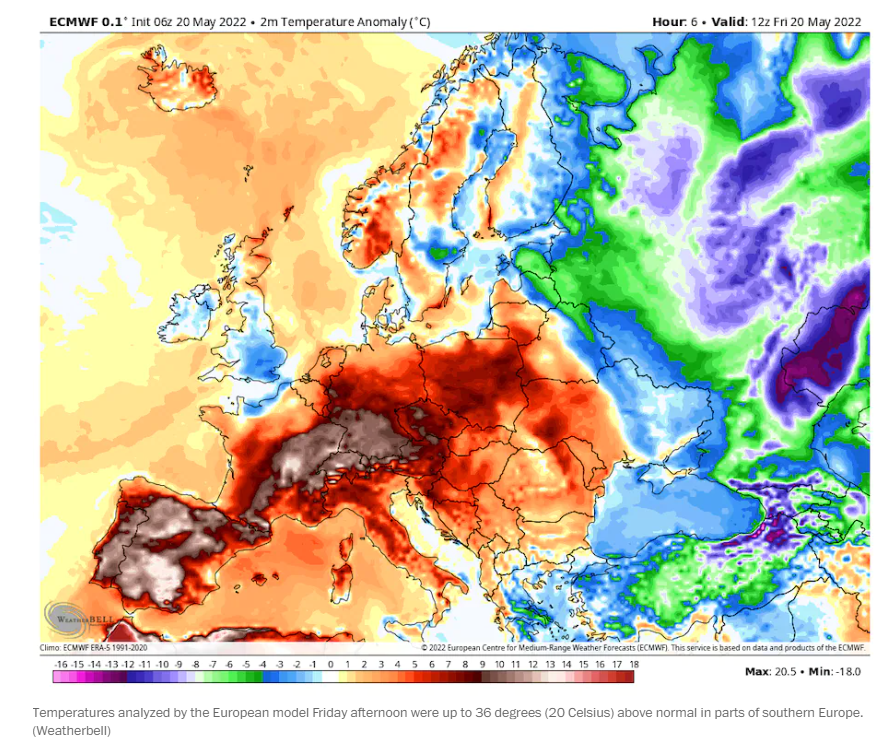 A brutal blast of record-breaking heat has spread over southern and central Europe, shattering May records from Portugal to Germany. Some of the most extreme heat is focusing in Portugal, Spain, and France.

The record-setting temperatures are occurring at the same time exceptional heat scorches the eastern United States. The concurrent heat waves on two continents underscore the effects of human-caused climate change, which boosts the frequency, intensity, and duration of such events.

Maximiliano Herrera, a climatologist who monitors weather extremes worldwide, tweeted that Friday was a “historic day in Europe with dozens of monthly records set.”

Spain’s State Meteorological Agency described the temperatures as “typical of summer and exceptionally high for these dates.”

France posted its 38th consecutive day of above-normal temperatures Friday. Forecasters with Météo-France, the country’s weather service, predict it will see its hottest May on record, even hotter than some Julys in the 1950s and 1960s.

“The earliness of the heat is outstanding,” Robert Vautard, director of the Institut Pierre-Simon Laplace in Paris, said in an email. “These temperatures are even high above normal for July or August.”

Meanwhile, much cooler air is pouring into northern Europe. The clash between the excessive heat in southern Europe and the cooler air settling in from the north triggered an outbreak of severe thunderstorms in Germany on Friday. Social media posts showed a large, destructive tornado striking the western German town of Lippstadt. The Associated Press reported heavy damage

Scores of records have fallen in southern Europe since midweek. On Thursday, the city of Jaén in southern Spain hit a new monthly high of 101.7 degrees (38.7 Celsius). Then on Friday, temperatures in the city soared even higher to 106.2 (41.2 Celsius) to eclipse its record set the day before.

Spain now experiences up to 30 more days that exceed 86 degrees (30 Celsius) than it did 60 years ago, tweeted Mika Rantanen, a researcher at the Finnish Meteorological Institute.

Nighttime temperatures have also been unusually warm. The city of Cuenca posted its warmest low temperature for May: 67.1 degrees (19.5 Celsius).

Nighttime temperatures in Spain are forecast to hover near or above 68 degrees (20 Celsius) into the weekend. High temperatures at night are of particular concern for vulnerable groups without air conditioning because of the physical accumulation of heat stress without adequate nighttime cooling.

High-temperature records for May have also piled up in France. On Wednesday, monthly highs were established in the towns of Albi at 92.7 degrees (33.7 Celsius), Toulouse at 92.1 degrees (33.4 Celsius), and Montélimar at 92.8 degrees (33.8 Celsius).

On Friday, Strasbourg climbed to 94.3 (34.6 Celsius) degrees and was among many locations in France to set new May records.

The heat in France, paired with potentially record dry conditions, is straining the country’s wheat crop. As of May 16, 73 percent of soft wheat was in good or very condition — lower than this time last year. Low yields in France, the European Union’s largest grain producer, will add stress to the global grain supply, which has already been affected by Russia’s invasion of Ukraine.

In Germany, numerous locations set May records Friday, with widespread highs over 86 degrees (30 Celsius) in the south.

The extreme heat has been caused by a hot, dry air mass from North Africa swelling over the region, along with strong sunshine. Herrera tweeted that Morocco posted its highest May temperature on record Friday, with a high temperature of 114.3 degrees (45.7 Celsius) in Sidi Slimane, a small city in the northwest part of the country.

The excessively hot temperatures have been intensified by elevated concentrations of greenhouse gases in the atmosphere from fossil fuel burning, Vautard said.

“Several heat wave studies have shown that all recent heatwaves analyzed in Western Europe using our statistical and physical tools bear the signature of climate change,” said Vautard, who researchers the role climate change plays in extreme weather events. “There is little doubt that this heatwave escapes the general rule that it has been fueled by climate change.”

Spain and France have warmed around 3.2 degrees (1.8 Celsius) and 3.6 degrees (2.0 Celsius), respectively, since the preindustrial era, much higher than the global average.

In Spain, most of the increases occurred in recent decades, too. In just the past 60 years, the country has warmed by 1.3 Celsius, according to a 2020 executive report by the meteorological agency.

Data from the agency also show heat waves (elevated temperatures of at least three days’ duration) have doubled per decade. From 2010 to 2020, around 24 heatwaves were recorded compared to only 10 to 12 in previous decades. Summer also arrives about a month earlier than it did 40 years ago, Rubén del Campo with the State Meteorological Agency told AP News.

“The number of hot days is going to continue its increase in the future until climate warming is stabilized, which would occur only if greenhouse gas emissions stop,” he said. 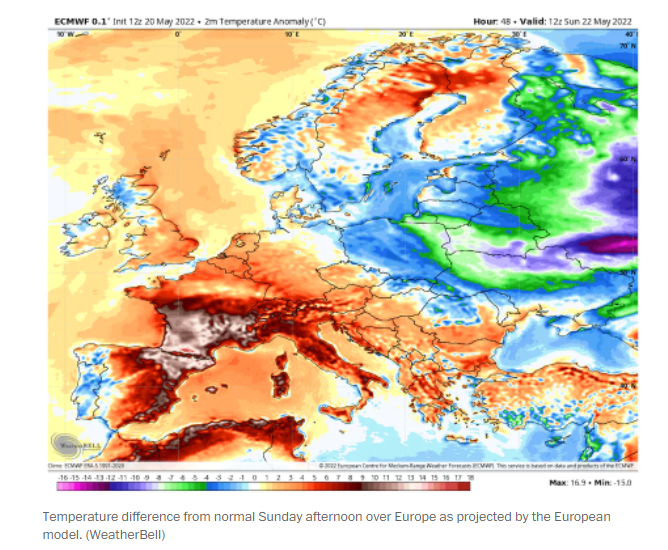 As cool air from Russia pushes southwestward through Europe, central parts of the continent will see relief from the heat on Saturday and Sunday, while the heat nears its peak over the Iberian Peninsula and southern France. It will take until early next week for the heat to relent some in southwest Europe.

We use cookies on our website to give you the most relevant experience by remembering your preferences and repeat visits. By clicking “Accept”, you consent to the use of ALL the cookies.
Cookie settingsACCEPT
Manage consent

This website uses cookies to improve your experience while you navigate through the website. Out of these, the cookies that are categorized as necessary are stored on your browser as they are essential for the working of basic functionalities of the website. We also use third-party cookies that help us analyze and understand how you use this website. These cookies will be stored in your browser only with your consent. You also have the option to opt-out of these cookies. But opting out of some of these cookies may affect your browsing experience.
Necessary Always Enabled
Necessary cookies are absolutely essential for the website to function properly. These cookies ensure basic functionalities and security features of the website, anonymously.
Functional
Functional cookies help to perform certain functionalities like sharing the content of the website on social media platforms, collect feedbacks, and other third-party features.
Performance
Performance cookies are used to understand and analyze the key performance indexes of the website which helps in delivering a better user experience for the visitors.
Analytics
Analytical cookies are used to understand how visitors interact with the website. These cookies help provide information on metrics the number of visitors, bounce rate, traffic source, etc.
Advertisement
Advertisement cookies are used to provide visitors with relevant ads and marketing campaigns. These cookies track visitors across websites and collect information to provide customized ads.
Others
Other uncategorized cookies are those that are being analyzed and have not been classified into a category as yet.
SAVE & ACCEPT